In search of balance: Rock climbing and Yoga

The mountaineer is a man who, through the physical action of climbing, strengthens and purifies his spirit. 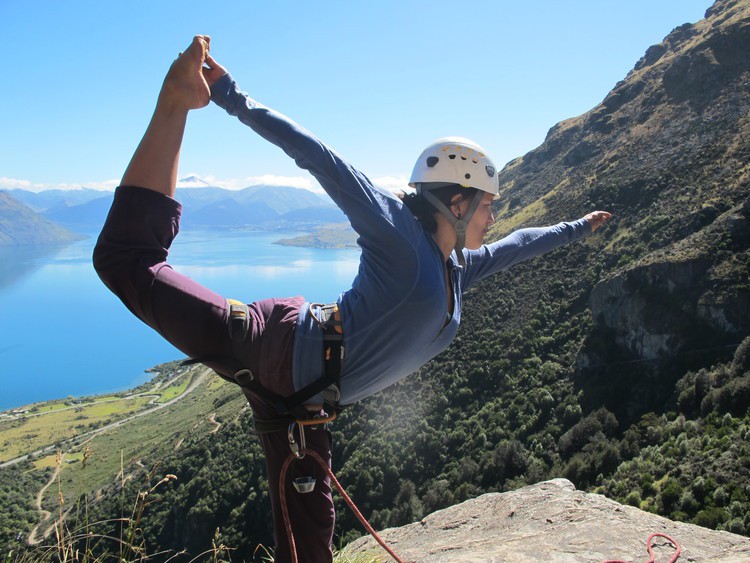 Both yoga and climbing have a goal, an end; yoga awakening the sleeping potential (kundalini) in every human being and climbing reaching the top, although it is not only the top itself, but the means by which it is reached, that is, the wall, and in both activities, their consistent and disciplined practice leads to find yourself, and at this point is where we can take both systems as a spiritual path / lifestyle, or simply as a relaxation or tool to calm the stress of modern life, it is certain that in both approaches the results will be very positive.

“GREETING TO ADISVARA (THE FIRST LORD SIVA), THE FIRST TO TEACH THE SCIENCE OF HATHA YOGA, THE SCIENCE THAT STANDS UP IN LADDER FOR THOSE WHO WISH TO CLIMB THE HEIGHTS OF RAJA YOGA” B.K.S IYENGAR (LIGHT ON YOGA)

The word yoga derives from the Sanskrit root "yuj", which means to hold, to gather, it also means union, communion, it is the true union of our will with the will of god (Brahma). Yoga is a complete science of life, Originating in India approximately 6,000 years ago, it is the oldest personal development and evolution system in the world, encompassing the body, mind and spirit.

The ancient yogis perceived the physical body as a vehicle, and shaped a method to keep it (body) in total balance, a method that combines all the movements (asanas) we need to ensure physical health, with breathing techniques (pranayamas) and meditation to ensure inner peace.

Yoga is a spiritual path and deep self-knowledge. As we know it today it was thanks to Patanjali, a sage from India who, with his classic work “Yoga Sutras”, compiled, coordinated and systematized it.

Yoga is World Heritage, it is an experiential and spiritual path that seeks the purification of our body, mind and spirit.

THE PATHS OF YOGA.

According to the spiritual tendency of each person, there are 4 main paths:

Mountaineering is a science, a game, an ethic or a sport, depending on the philosophy and culture that the person who practices it is inspired by. Mountaineering is the activity developed to reach the summit with natural means, or with the help of artificial means. The terrain where the mountaineer works is essentially made of rock and ice. Mountaineering, understood as a scientific search and exploration, began towards the end of the 17th century, when the enlightened culture enlivened men of science, dedicated to the effort to understand and rationally justify all the phenomena of nature.

In Asia and the Far East, mountain knowledge has been characterized since ancient times by its strength and dimension that transcends lines and physical contours, to become the dwelling of the gods and a place of contemplation. The first climbers were men of science for whom the mountain was used as a natural laboratory. It was not the stimulus of the conquest that pushed the first climbers towards the summits, but the desire to give a concrete answer to the theoretical data produced on geophysical, chemical and meteorological phenomena. However, it is true that to the scientific interest of the excursions was added the desire and the ambition to climb the peaks that no one had ever trodden.

It is a new sensation that incited pioneers little by little to leave the scientific world and dedicate themselves almost exclusively to the conquest of the peaks. Mountaineering was born. From England the first climbers from the Alps would arrive in great numbers and towards the end of the 19th century the Alpine scene broke into the Austrian and German climbers, later the Italians.

Preuss is the most prominent character in heroic mountaineering, who rejects all obligations in the fight with the mountain. With Preuss free climbing reaches its highest point when it comes to style, audacity and risk, but it takes many lives, including him. Then the concept of safety is introduced in climbing as an indispensable condition to achieve the objective.

The summit is spiritualized and identified as the final prize, the mountaineer is, a man who, through the physical action of climbing, strengthens and purifies his spirit, because ascension brings him close to God.

In America the first steps were taken by a type of mountaineering understood as athletic play and exercise free of cultural or philosophical requirements. In the last 40 years, mountaineering has spread in all parts of the world. In each nation It experience an evolutionary process linked to the cultural, ethnic and social identity of each people. The first female climbing in mountaineering history is the young Savoyard Marie Paradis, who in 1809 ascended to the top of Mont Blanc. Since then, parallel to the increase and spread of male mountaineering, there has also been an evolution of mountaineers.

Yoga as a training in climbing is essential and brings many benefits.

In the 60s, there was a boom in climbing, and yoga was very important, it marked a stage, it turned towards the yogic trend of climbers.

In North America, a true revolution in the conception of climbing was born, on the granite walls of the Yosemite Valley, the new climbers, coming from the protest groups and hippie movements, opened routes of difficulty, devised with an extraordinary aesthetic sense. But the most revolutionary novelty was due to the exceptional athletic contribution prolonged in time that those extremely difficult climbs required and that were overcome thanks to a severe psychophysical training provided thanks to yoga.

The new climbers began to be inspired by the oriental philosophy of yoga and to use it as a preparatory discipline, both physically and mentally.

Climbing is a movement-oriented activity that requires calming the mind for its efficient performance, and the regular practice of asanas, such as pranayama, provide the climber with the necessary tools to quieten the constant bombardment of the mind's thoughts. Climbing as a lifestyle requires time to train, with yoga the same thing happens, and it is the will, perseverance and patience that will take us to the top, to conquer our ego.

The mind-body connection is complicated, but really amazing, and their "union" is as simple as breathing. Breathing is the vehicle, and in both disciplines it is essential to use correct breathing, we can only fully extend the body well if we synchronize breathing with movement. This is very important both in yoga to carry out a proper posture, and in climbing, so as not to lose your calm while you are immersed in the wall, and to continue towards the goal. It is amazing how many people unconsciously hold their breath in difficult postures, both yoga, climbing or in everyday life, and all they do is cut off the continuous flow of prana (energy) and that is where the tensions are created.

Constant practice helps calm the nerves. During a deep inhalation of a normal person, 500 cm3 of air are taken, when a person who practices pranayama daily can take 3,000 cm3 increasing the lung capacity, which gives the climber more resistance and does not tire so easily. The climber who practices deep breathing can control his mind and oxygenate his muscles at the same time.

Climbers need flexibility for their climbing to be more effective, the climbing itself is much more mental than physical! One has to have conviction and be as relaxed as possible to not give rise to foreign thoughts, this mental interference is obstructing our ability to focus on the here-now !, the mind has become our worst enemy and we are losing our energy, our prana, all this generates tensions that are reflected in the muscles, one way to neutralize fear is through repetition of a mantra: meditation technique, they are brief words or phrases in Sanskrit language that have great vibrating power, it should be clarified that they are not prayers. They are vibrational sounds to make the mind relax.

"IF DURING MY CLIMB I AM IN A STATE OF TENSION, IT IS BECAUSE I AM NOT BREATHING PROPERLY" JHON BACHAR-CLIMBER.

For all this, the correct thing would be to maintain a constant deep and fluid breathing, and thus achieve the "union" of the body and the mind through the breath, thus we will be able to use yoga in any aspect of life.

In the case of asanas, with their 84 poses and more than 500 variants, they provide various benefits to the climber. All the postures are very good, improve blood and oxygen circulation in the brain and make the muscles more flexible, this is very important for the climber since it helps him to stretch even more, to be able to get where could not, they also provide: strength, endurance, balance, mobility, coordination, adequate muscle tone, among others.

The Hero / Greek posture is very important to work the hip, since when opening it, it provides an excellent benefit to the climber, it also develops balance in the feet, which is directly transferable when climbing on a wall.

Yoga nidra (psychic sleep), or relaxation, is another tool for the climber. It is a powerful technique in which you learn to relax (in the savasana posture, that is, lying on the floor face up) in a conscious way, it is a method of inducing complete physical, mental and emotional relaxation, after a hard day of climbing provides relaxation to the muscles.

The most common injuries in climbers are in the tendons of the arms and hands and also injuries in the back and spine.

When practicing asanas, pranayama and yoga nidra periodically, with awareness in the body, the benefits appear, this totally improves blood circulation and shortens the time of injury.

Strengthening the muscles is essential, and postures like Raven and Vertical help to strengthen the arms and tendons.

In the case of the back, all standing postures are very beneficial as well as sirsasana (headstand) and sarvangasana (candle).

Yoga is such a complete discipline, it is such a valuable tool for the human being, that it can "get along" with any other activity or doctrine, its complete execution provides many benefits to those who practice it. And in the case of climbing, It works very fully as a training, both physically and mentally, fundamental aspects of climbing.

Both yoga and climbing can be practiced by any type of person, whether athlete, sedentary, elderly, etc., only they must adapt to their conditions and do it at the rhythm of each one to avoid causing physical damage.