Imagination gives us illusions and insurmountable dream trips. And the creativity put into practice, which comes inexorably in tow, represents one of the greatest satisfactions of existence and, above all, in our particular world of infinite undulations and verticalities, of life itself in the mountains.
Every time I had the opportunity to guide groups through the Covunco valley towards the top of Domuyo, the idea of ??ascending somehow through the interesting south face, always disturbed and increased the frequency of the spiritual heartbeat. I felt that one day the possibility of being able to crystallize the longing was going to wink at me. Finally, the summer of 2010 was the one who would grant me a precious opportunity. In the absence of colleagues (it is never easy to get them, especially in short time), the adventure had to begin to be woven alone, a venture that was undoubtedly going to force me to double the degree of concentration and commitment. 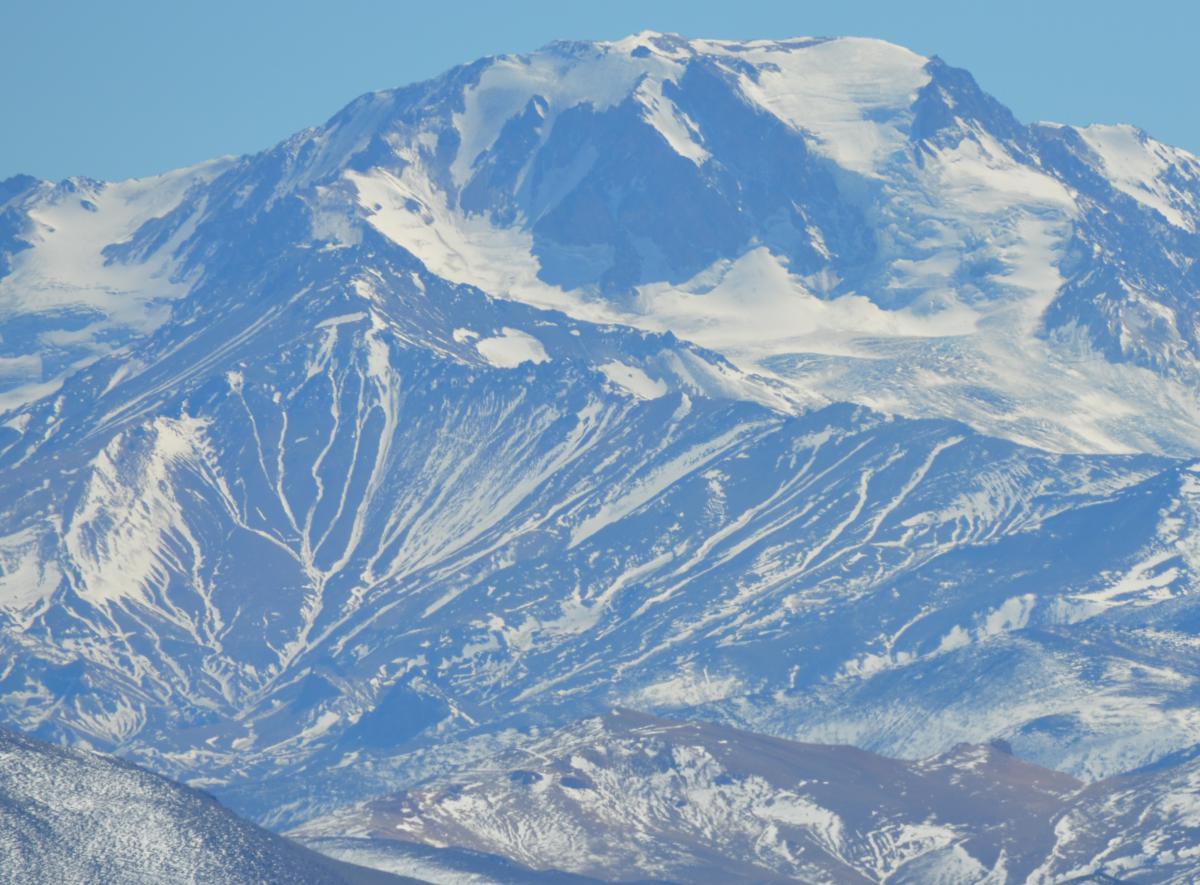 On January 29th we had finished guiding an ascent with Esteban Iglesias and I had a couple of days off until my next guided engagement in the Lanin. And I went back up to walk and see what happened and .... if the opportunity arose, welcome. Gaby Valdés (luxury carrier in Varvarco) reached me at Playón from Aguas Calientes and then got off to move our group to Varvarco. Shortly after passing the Twin Stone that acts as a bridge with the Covunco, I met Adri Penzotti (a well-known Mendoza guide), who was going down with a client, and we were poking around for a while.I quickly climbed up to C1 in the lagoon and from there continued to Los Hoyos camp (designed some years ago by the friend guide Luis Favra), at 3,500 masl, located lower and west of the traditional 3800 C2. I also stopped to take a detailed look at the south wall and photographed the line I had imagined as possible, between the great snow shovel and the gigantic rocky crags that descend precipitously from the edge. And finally to continue with the description and meetings of relevant characters, in C1 I met 4 people who were going to be great companions and friends on the return: the guide of Junín de los Andes, Don Cabezón and 3 seasoned enthusiasts for reaching the summit.

I slept anxiously and left at 5 AM. It was another excellent day. I went up the great haul of flagstones and pebbles that descend next to the southwest glacier and fixed as a point a spot of snow just below the rock wall that I understood I had to overcome to enter the couloir that I had chosen at a distance. It took me two hours to reach the base of the wall, at 3,900 masl. When I had climbed the first 5 meters I was already cursing the situation of climbing with boots on broken-mixed rock, this delicate and magnificent passage of 30 meters. It was cold and I had to climb without gloves. My fingers were quite hard so to rub a little and keep "pulling up"! In the corridor, ice covered the entire central sector; I opted to add crampons and the two ice axes to the activity. The objective risk of this passage is the key. The stones fall is constant, "TVs" passed by buzzing all the time. You have to be very attentive to the previous sound to be able to avoid them, but above all, you have to be fast and keep going up. The channel has about 400 meters of unevenness. I chose to go out to the left, towards the snow, since then it narrows a lot and there the landslides can drag everything that crosses them. When the mix terrain is ??finished, a constant 45º to 55º slope appears with ostentatious snow and sporadic stretches of granulated ice. I took by the tongue to the right of the big shovel (there is a striking rock spur that divides them), direct towards the direction of the summit.The fatigue was felt and on top of that I realized that I had lost one of the tubular sheets; I was literally with one less ice ax! I passed the last delicate protrusion, of about 70 ° very short and I kept going til the end of difficulties, at 4620 masl. I collapsed and gasped for a wonderful time immortalizing the sublime emotion. I walked to the famous pre-summit Plateau and from there, along the trace, to the cross that dominates everything. My 4 new friends had also crowned the summit through the normal via and were already descending. We congratulate each other between gusts of more than 70 km. I let myself fall next to the cross, put the automatic for two snapshots and sank into the long descent down the normal via. That same day we continued to Playón and from there to Varvarco.

in memory of those who accompanied me on various sections of the climb, the condors. Below I found out that Castillo (who provide the mule service a few meters from the Playón) had gone straight up the Gran Pala, parallel to the left of this route. I invite all climbers to repeat the itinerary, check difficulties, etc; It can turn out to be a very good alternative for those looking for a variant of high emotions.